The Jeep® brand launched its second video this week, “More Than Just Words,” in the lead-up to the Big Game.

“More Than Just Words” is an illustrative narration of “The Star-Spangled Banner.” The song serves as the catalyst that takes viewers on an unexpected musical and visual odyssey, with images splashing across the screen representing the song’s lyrics. Jeep brand vehicles embody the spirit of the brand through the pillars of freedom, adventure, authenticity and passion.

“We’re delighted to continue our collaboration with OneRepublic,” said Olivier Francois, Chief Marketing Officer, FCA. “The band’s soaring musical arrangement and Ryan Tedder’s vocals complementing the visual images behind the song’s lyrics makes the video come to life in a way we only dreamed possible.”

The Jeep brand’s “More Than Just Words,” directed by Mark Toia with music by OneRepublic, was created in partnership with Dallas-based The Richards Group. 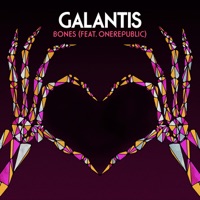 Ryan’s episode of The Launch will be aired on January 30. The song he brought for contestants is called Better.

And I may owe him something… 😬😬😬 #BETTER #TheLaunch pic.twitter.com/JtvFkB85Gu

Already loving this song! The mentors give you a sneak peek at "Better" from @CTV's #TheLaunch. Get into it Wednesday at 8/9mt. pic.twitter.com/37WtT4KTjJ

Bones is a collaboration between OneRepublic and Galantis to be released on January 31.

OneRepublic has sold approximately over 10 million records worldwide – and a new album, the band’s fifth, is due to drop this year.

I caught up with the band’s Grammy award-winning lead singer and songwriter, Ryan Tedder, to talk about the documentary, his burn out and the slew of TV and film projects he’s developing.

Simon Thompson: Did you need much persuading to do this?

Ryan Tedder: I did need some persuading; I had to be talked into it. We were not launching the first single off a new album, and we’re going to do an album, if not two albums in 2019, so for me where this landed time-wise, it didn’t make any sense to me in terms of the calendar. I got weary because what are we promoting? You know that in the music business if you go on camera, it’s because you’re finished promoting something. Not that I don’t love Netflix, I didn’t know what we were doing. When I sat down and watched some clips from one of the other episodes it was done so well that I didn’t care what we were promoting, we should do it.
END_OF_DOCUMENT_TOKEN_TO_BE_REPLACED