White Christmas is a cover song by OneRepublic used in a year-end advertising campaign by Jeep. It is available on iTunes since November 9. 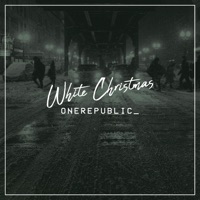 OneRepublic’s most recent album, Oh My My, came out in 2016, but in November of that year, frontman Ryan Tedder had a nervous breakdown and nearly quit the band.  Overwhelmed by stress and anxiety, he canceled everything, including a tour and promotional activities.  He’s since recovered — but now that new OneRepublic music is coming, Ryan realizes he needs to be ready to handle what comes next.

On Twitter, OneRepublic has been teasing “#new1rsoon” and “New Music.”  The band also posted a photo of Ryan onstage with guitarist Zach Filkins, and captioned it, “Looking forward to a lot more of this in 2019.”  So things are gearing up, and so is Ryan.

“I know that the next time we actually put out an album, I have to have the mental constitution — and the emotional and physical — to work it, and not bail, so I wanna get it right,” he told ABC Radio a couple months ago when he revealed that OneRepublic was working on a new album.

“I have to treat this like it’s our debut album,” he added. “And that’s what I’m doing.”

Of course, Ryan hasn’t just been sitting around all this time. When he realized he couldn’t promote Oh My My, he turned to working with other artists.  In the past 12 months, he worked on albums by Paul McCartney, Camila Cabello, Shawn Mendes and U2.